The story so far

Over the last ten years Fulham Football Club has enjoyed increasing success on and off the pitch.

Over 25,000 people now attend our home games on a regular basis and, with 98% occupancy of the ground in the 2010 – 2011 season we are therefore looking to expand Craven Cottage.

In December 2011, we held the second of our consultations on our plans and presented more detailed proposals to invite and gather further feedback from our supporters, neighbours and other interested groups.

The responses received from the second exhibition show that:

97% supported the Club’s ambition to stay at Craven Cottage and expand to 30,000 seats.
89% were supportive of the Riverside stand development.
81% thought that opening up the River walk would be an improvement they would like to see in the local area.

Following this exhibition the proposals were finalised and a planning application submitted to the London Borough of Hammersmith and Fulham in January 2012.

Following a planning hearing at London Borough of Hammersmith and Fulham on Thursday 26 July 2012, the Club’s plans to redevelop the Riverside Stand at its Craven Cottage Stadium have been approved. 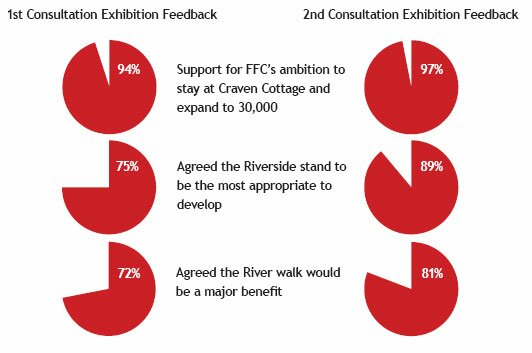